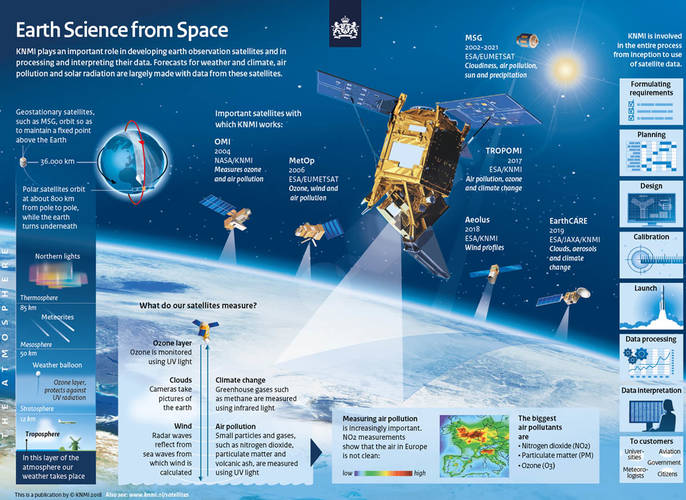 Satellite based atmospheric observations have many applications in the areas of weather prediction, climate research, air quality monitoring and security.

We prepare new satellite missions, develop calibration and retrieval algorithms, and process and distribute data products to users via the TEMIS, MSGCPP, and Scatterometer data portals. Our data products are used for weather forecasting, climate analysis, environmental monitoring as well as many other atmospheric research studies. To evaluate satellite observations we also operate ground-based instruments and have organized specific campaigns in cooperation with other KNMI departments and numerous external partners (for example the CINDI-2 campaign held at the Cabauw measurement site).

Our division holds the Principal Investigatorship for OMI, launched in 2004 on NASA's EOS-Aura satellite, and for TROPOMI, launched in 2017 on ESA's Sentinel-5 Precursor satellite. In addition, our department participates in several international science and mission advisory groups. We also perform work in preparation of the new atmospheric composition satellite missions Sentinel-4 and Sentinel-5. Our projects are often conducted in collaboration with various national and international partners, and are funded by both national and international agencies, including NSO, EUMETSAT, ESA, and the EU.

Air quality is determined by the presence of short-lived trace gases, mainly O3 and NO2, and aerosols, which affect human health and climate. We perform retrievals of tropospheric NO2 from OMI and GOME-2, which are assimilated in global and regional air quality forecast systems. NO2 and CH4 satellite data are also used to determine the sources and strengths of emissions in a top-down approach.

Clouds are strong regulators of the Earth's radiative balance, and play a key role in the hydrologic cycle by determining precipitation and evaporation. We determine cloud physical properties and solar radiation using the CPP algorithm from SEVIRI and AVHRR for nowcasting, climate monitoring, and model evaluation. For cloud correction of trace gas retrievals, we determine cloud height from O2 A-band spectra using the FRESCO algorithm applied to GOME, GOME-2, SCIAMACHY and plan for its application to TROPOMI data.

Aerosols are an important component of air pollution and affect the radiative balance of the Earth. For aviation, volcanic ash is an important threat. We monitor absorbing aerosols, like volcanic ash, desert dust and smoke using UV, visible and IR radiation. In cooperation with other KNMI departments, the group operates a UV-polarization lidar at Cabauw which has proved to be useful for the detection and quantification of profiles of ash mass concentrations. KNMI also operates an advanced multiwavelength Raman Lidar for cloud and aerosol studies.

Active remote sensing is needed to determine the vertical structure of clouds and aerosols. For ESA’s EarthCARE mission (launch 2022) we are developing lidar algorithms and developing high-quality synthetic data for EarthCARE L2 algorithm development and testing.

Ozone in the stratosphere is the Earth's natural shield for the damaging UV radiation from the sun. However, ozone is also an air pollutant when it is close to the surface (smog) and an important greenhouse gas when it is around the tropopause. We measure ozone using UV satellite measurements and make global ozone data products: total ozone, ozone profiles, and assimilated total ozone. On the basis of satellite ozone measurements we provide UV forecasts. Data can be found on the TEMIS website.

A wind scatterometer is a radar instrument mounted on a weather or research satellite which emits pulses of energy (centimeter radio waves) to the sea surface and then measures the energy scattered by centimeter waves on the sea surface. Wind speed and direction can be derived from this backscatter signal. We provide scatterometer ocean wind vector products operationally in near-real time (i.e., winds are computed and distributed as soon as the raw satellite data are received) and as climate data records. For the latter, special attention is paid to the temporal stability and uniform calibration of data from different instruments. For more information and an overview of our activities see our wind scatterometry web pages.

A Doppler Wind Lidar emits a laser beam into the atmosphere and detects the reflection from molecules, aerosols and cloud droplets, depending on laser wavelength. The frequency of the reflected light will be slightly shifted due to the movement of the particles, the so-called Doppler shift. The frequency shift is a measure for the particle's mean speed and hence for the ambient wind speed. The time delay between emitted and received laser light allows the retrieval of wind profiles using this technique. ESA's Core Earth Explorer Atmospheric Dynamics Mission (Aeolus) is the first instrument to provide a three-dimensional global coverage of wind observations.

It has been established by the IPCC that it is extremely likely that more than half the observed increase in global average surface temperature from 1951 to 2010 was caused by anthropogenic factors. The most important of these influences is the change in the chemical composition of the atmosphere due to anthropogenic emissions of greenhouse gases like CO2 and CH4. Anthropogenic emission of short-lived trace gases, like NO2 and HCHO, lead to a change in heating rate of the atmosphere via tropospheric ozone formation. Anthropogenic emission of aerosols can either cool or heat the atmosphere. Clouds are an important natural feedback factor, since clouds mostly cool the surface. The dynamical atmosphere and ocean response to the changed differential global heating is key to understand local impacts, but uncertain. Our satellite data products contribute to climate monitoring.

Our sun is a magnetically active star that has a strong influence on the weather conditions in outer space. This space weather can be quite violent and has a profound influence on infrastructures like satellites, GPS, aviation, power grids, telecommunication, gas and water supplies, the financial sector, and emergency services, the so-called vital sectors that are critical for our national security and economic vitality. In addition to the well known weather alerts, KNMI now also issues space weather alerts so that our society can be prepared for the effects of space weather. KNMI collaborates with national and international partners to provide space weather forecasts.

In addition to the work described above, the group conducts supporting but more general research in the areas of: